Happy New Year to all you Sheiks and Sheikettes! 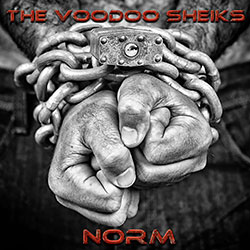 Shall we moan and groan about how crap 2020 was, and chuck in a load of expletives for good measure? Nah! That’s been done to death!

How about this – in 2020 the Sheiks tried to ‘out-tap’ Spinal Tap by changing drummers for the zillionth time. Now we’ve got a drummer who used to be our guitarist occupying the drum stool. Go figure!

‘Cos of the ‘Rona we haven’t gigged with our new/old drummer yet, but I’m sure that when we do I (Slowblow) will be constantly looking over my shoulder thinking “Shouldn’t you be stood over THERE?!”

If you’ve been living in a cave (“haven’t we all”) and you don’t know who Brent is – then let me tell you Brent is a stellar guitarist who is gonna blow you away!
With Brent coming in, I like to think of it along the lines of when Joe Walsh joined the Eagles! But hey, I’m delusional and borderline insane, so does it matter what I think?!

Now to the juicy bit! On Friday 15th of January, we will be releasing our first ever single! “Whoop whoop!” That’s not the title by the way – they were just words that I thought might convey ‘excitement’!

I say ‘single’, but it really is just a song that we’re putting out there for everybody to enjoy and somehow try to alleviate the boredom of lockdown. It’ll be downloadable for the princely sum of something like 99p, of which we won’t get paid enough to cover the cost of the ink it took to write it!

But “hey-ho” that’s the way the mop flops… So, check out the single and let us know what you think, and remember to stay safe and don’t lose your marbles!

Have a read of the full press release, click here.