Rocking our way around the South!

The first week of May saw us return to Southampton’s esteemed venue, The Platform Tavern which is well known in blues circles in the south and a favourite of touring bands. 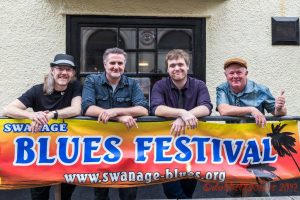 The first set, which dare we say it is usually our ‘slower’ set, was spent gearing the crowd up, who were clearly there for the music, it was good to see. We set a tight standard for the evening and propelled the 2nd set straight off into the Sun! A big thanks to Stewart Cross for booking us. We’re back there on Nov 11th.

Next up, we were extremely pleased to support Dr. Feelgood at The Half Moon, Puntey. Their line up may have changed over the years but the songs are still there. We opened up proceedings with our usual blistering paced set and didn’t take our foot of the gas until our set was over, all 50 minutes of weapons grade rhythm & blues!

We then hit The Swan in Crawley, one of the main pub venues in the area with thanks to Rob Brindley. The pub is set out as such so the performing bands are more or less in the centre. This place is certainly a bit more ‘heavy’ minded – pictures of Iron Maiden and other classic metal bands can be seen here and there. A rip-roaring night followed suit with people boogying away and that’s what it’s all about.

As we head into June….

The 10th of June saw us travel around the M25 to Billericay to play the ‘Blues at Barleylands’. Now this place, is an excellent set out music venue with a stage & good lighting. Top sound crew Daryn & Steven Gilbert did a faultless job on PA duties.

With the afternoon setting, we were pleased for it to be well attended, and they were all there for the music. We adjusted our set slightly, only slightly,  to accommodate an afternoon gig adding in some slower blues tunes including one from our first album that we haven’t played for a while, ‘Bitter & Then Some’

We have to say thanks again to our enthusiastic fans Ricardo and the lovely Elizabeth for trekking all the way from London via train and bus to see us perform, the icing on top of a very good cake. Joyous stuff.

We then hit the south coast twice in one weekend. The 23rd saw our debut at The Dolphin. This is another great Southampton venue. Cheers to our friend Malcolm for pointing us towards this one. Investigating the beer garden reveals this place is also well arranged for outdoor performances. It has a superb stage and plenty of room to boot. Our gig tonight however was situated in the main bar. Given the wooden flooring, we expected a lot of bounce and perhaps some degree of reverb. However the sound turned out to be very well levelled, which adds weight to our performance.

Having some of our Swanage friends in the crowd and others certainly added to an equally appreciative locals led audience.

The following evening, we headed to The Eastgate in Chichester. It’s been awhile since we performed in Chi, so it was good to be reminded of what a nice town it is. Cheers to our mate Mel Chidwick for the help with this one. Despite the ‘set up in a separate room’ feel, the sound was tight and to see the working staff behind the bar clearly enjoying themselves bopping away between serving drinks, made for a fun evening. 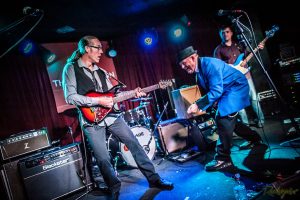 The next few months are going to be an interesting time for The Voodoo Sheiks camp. We will be playing at The Farnham Maltings in July along with our good friends Sugarman Sam & The Voodoo Men followed by gigs at The Oak, Kingston, The Bell in Bearsted, Kent (Blues at The Bell) thanks to Phil Woollett of The John Doe Trio. The Surrey Blues Club, the place where it all began, cheers Shakey, The Old House Dorking, The Wrotham Arms, Broadstairs, The Swanage Blues Festival, The Malt Shovel, Horsham, The Bedford Esquires, The Platform Tavern, Southampton, The Three Lions (Scatchers) Farncombe, The Tuesday Night Music Club, Hooley along with Sugarman Sam & The Voodoo Men once again and The Golden Eagle, Southsea.

In between all that we are writing songs for our third album to be recorded in Feb/March 2018. We’ve already played a few new ones live but will keep the kettle boiling until we hit the studio.

For full details of all gigs please click here.

Your support is welcomed and very much appreciated, without which we couldn’t do all this.